Back to the Department of Public Works / City Engineer page 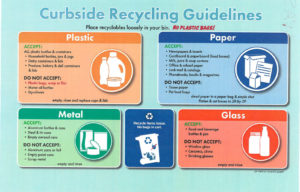 Bulk pick-up will be the week of June 14th-18th (2021) and the week of October 11th-14th (2021) on the same day as your garbage day.  Bulk pick-up is limited to three (3) items – NO electronics; large appliances; construction debris; tree trunks or stumps; batteries; stone, concrete, rubble earth, or sod.  Allowable Bulk items are Small appliances that are not banned from landfills (toasters, radios, etc. NO MICROWAVES); Furniture (3’x6’ or smaller); small auto parts in containers other than non-alkaline batteries; Carpet, rolled and sized appropriately for handling by one person (less than 4 ft and  45 pounds).

Calls regarding missed trash collection and all related trash questions should be directed to our Green for Life Customer Service Rep Penny at (920) 617-6776.

Back to the Department of Public Works / City Engineer page